The way fluoridation promoters talk about fluoridation as one of the world’s “Top 10 Public Health Benefits” you would think its benefits were well established and substantial.

But scratch the surface and the reality is far different. For decades, water fluoridation was promoted with the argument that swallowing fluoride provided a “systemic benefit” and that fluoride would concentrate in teeth and be excreted through salivary glands.

But by 2001, this theory was rejected even by fluoridation supporters like the CDC, after scientific studies found fluoride did not work systemically, only topically. [i]

There is not a single double-blind study (the modern standard for showing scientific effectiveness) showing that fluoridated drinking water reduces cavities.

While fluoridation supporters use statistical tricks to inflate the importance of this difference, it is telling that the study they have long relied on as the key epidemiological evidence supporting the benefits of water fluoridation shows just a half cavity difference.

This is consistent with the fact that cavity rates in fluoridated and un-fluoridated countries have reduced at about the same rate since the 1950’s. 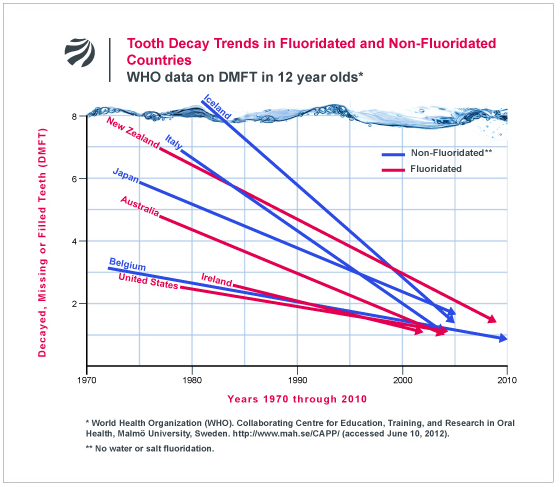 While fluoridation promoters continue to push the controversial addition of fluoridation chemicals to drinking water, there are important steps that we can all agree on to promote better oral health for children, such as increased access to care, increased preventative care, encouraging better nutrition, in-school dental screenings and allowing dental hygienists to do certain treatments on children’s teeth.

GO ON TO REASON 5

[i]  U.S. Public Health Service Recommendation for Fluoride Concentration in Drinking Water for the Prevention of Dental Caries Public Health Reports, Vol. 130 at 2-3 (2015).